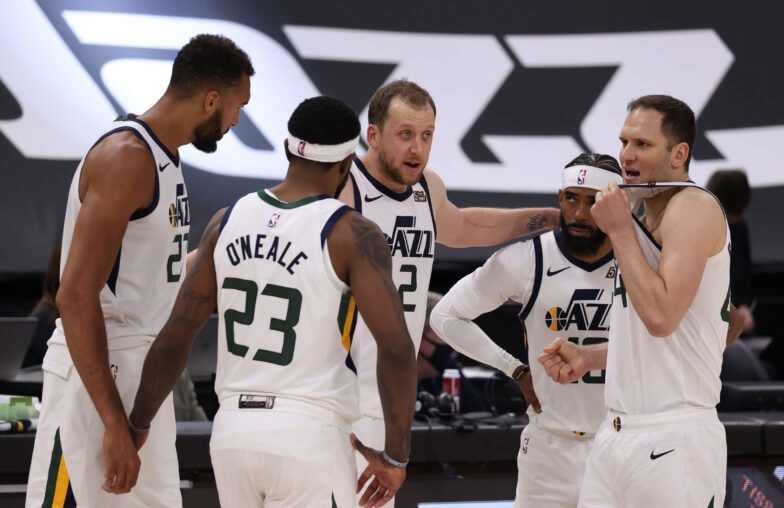 Utah must regroup, and potentially do so without Donovan Mitchell, in order to respond in Game 2.

So what happens to a team built around a star player and 3-point shooting when that star doesn’t play and those shots don’t fall?

You become a suspicious No. 1 seed and find yourself down 0-1 in a first-round playoff series against an eighth seed that barely escaped the State Farm Play-In tournament.

A fall from the penthouse to the sidewalk is a long one, and the Jazz are at least staring at the possibility after dropping the 112-109 opener to the Grizzlies and losing home-court advantage which, given the large gathering inside Vivint Smart Home Arena, gave them an edge. Or was supposed to, anyway.

Hours before tipoff, the Jazz medical team pumped the brakes on a return by Donovan Mitchell, who missed the last month with an ankle sprain. Curiously, Mitchell earlier in the day said: “I feel good. Always gonna be soreness … I’m ready to go tonight. No pain. I’m excited to get going.”

Welp. After getting a second opinion from the medics, Mitchell had to confine his good feeling to the bench Sunday. His absence was obviously a significant one for the Jazz; Mitchell had career-high averages of 26.4 points and five assists and was an All-Star. The offense went through him, and he’s the most qualified Utah player to command the ball in the moment of truth.

Shaq, Kenny, and Chuck discuss Utah’s perimeter-oriented game plan and why it misses Donovan Mitchell so much.

Still: Utah managed quite well without him for the final 16 games, finishing the regular season in style with the NBA’s best record. That only caused the enthusiasm in Salt Lake City to swell, since the last Jazz team to sit this high on the throne was led by Karl Malone and John Stockton.

Therefore, one team strength was gone, and another one followed when Rudy Gobert, a Kia Defensive Player of the Year finalist, fouled out of a tight game with four and a half minutes left.

Finally, a third asset disappeared as well: After feasting on long-distance shots all season — the Jazz averaged nearly 17 made 3-pointers per game — that approach was a recipe for disaster when the Jazz made just 12 of 47, for 25 percent. Therefore, Game 1 was as suspenseful as any top-seeded team could imagine, and the Grizzlies, whom nobody expected to eliminate the Warriors to arrive here in the first place, had nothing to lose and played loose-y. Dillon Brooks was beastly with 31 points, doing much of his damage in the middle quarters, before Ja Morant (26 points) closed out the win late in the game by attacking a rim that was no longer protected by Gobert.

The Jazz may eventually rebound in this series, but if nothing else, they gave a glimpse into how vulnerable they can be in spite of their high seeding. First: They rely heavily on 3-pointers, perhaps to a fault. There’s very little versatility in their offense, which is all about spacing the floor, going iso and finding the open man standing behind the arc. This isn’t exactly a novel idea in today’s NBA; the Jazz simply go the extreme. And when that happens and the shots don’t fall, the team must scramble to discover a Plan B … whatever that is.

Dillon Brooks: ‘They had some guys that couldn’t guard me’

Everyone saw Sunday what it wasn’t: Get the ball to Mitchell. His status will be renewed prior to Game 2. If there’s another red flag hoisted into the air by the medical staff, don’t expect the Jazz to press the issue. These staffs have increasing power within NBA teams these days, and coach Quin Snyder said: “Obviously, Donovan, being the competitor that he is, wants to be out there and, hopefully, will be out there soon. I think first and foremost in everyone’s mind is our players’ health.”

The Jazz are trying to become one of the fortunate few teams in history to win a championship without a true superstar, following in the footprints of the 2004 Pistons. They’re not off to a great start, though, and losing to the Grizzlies even without Mitchell went counter to the message they wanted (and probably needed) to send to their competitors in the league, especially in the West.

For those who were leery of Utah’s No. 1 seeding, there’s something to munch on. For those who refuse to over-react and ignore the previous six months, eventually Mitchell will return and those 3-point shots will fall. But it better happen this series, and soon enough.

Shaun Powell has covered the NBA for more than 25 years. You can e-mail him here, find his archive here and follow him on Twitter.

The views on this page do not necessarily reflect the views of the NBA, its clubs or Turner Broadcasting.